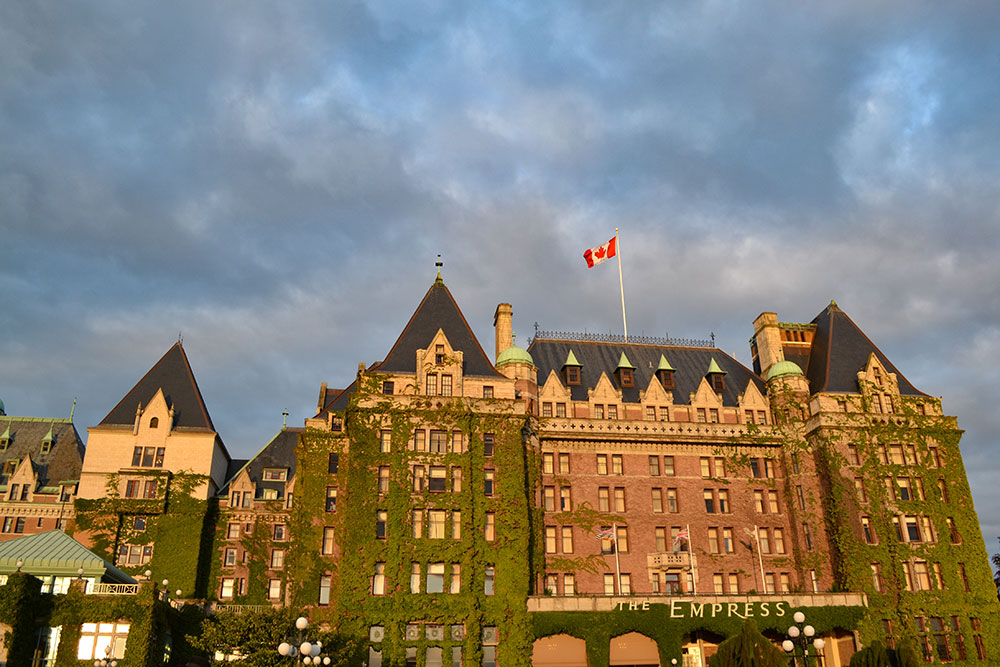 On the southern point of Vancouver Island lies the city of Victoria, one of the oldest cities in the Pacific Northwest. It’s mild weather, and laid-back vibe has made it a popular destination for seniors and college kids from across Canada. And if you’re traveling to western Canada, it should be on your itinerary.

It’s a compact city with most of the activities and landmarks within walking distance of the downtown core. The neighboring town of Esquimalt is the Pacific headquarters of the Royal Canadian Navy, so don’t be surprised to see a warship steaming past.

Lining the streets of Victoria is architecture dating back to its founding in 1843. Named after Queen Victoria, the city’s architecture reflects it’s namesake’s style and Canada’s close ties with England. The classic style can be seen in everything from the Parliament Buildings (now home to the Legislative Assembly of British Columbia) to the iconic Empress Hotel.

A short walk from the downtown core is Craigdarroch Castle, built in the 1890’s by coal baron Robert Dunsmuir. The house turned museum gives a glimpse of what it was like to be part of society’s elite in the 19th century Pacific Northwest. The self-guided tour takes you through 39 rooms spanning four floors (five if you include the tower). The castle is filled to the brim with period furniture and household items as well as family keepsakes gathered on travels abroad. The castle is also reportedly haunted, so keep your eyes open for Casper.

The city is home to the oldest Chinatown in Canada and the second oldest in North America, after San Francisco. The district was built in the mid-1800’s and fronted by The Gates of Harmonious Interest. Beyond the gate, the community is jam-packed with beautiful historic buildings, great restaurants, and unique stores. From the supposedly haunted Fan Tan Alley (a 5-foot wide street lined with unique shops) to the Tam Kung Buddhist Temple and great authentic Chinese restaurants; you will leave full and happy.

Take in the outdoors

Victoria is known as the ‘Garden City’ due to it’s mild temperatures and mostly snow-free weather. Many traveling horticulturists and gardeners make their way to The Butchart Gardens, a National Historic Site of Canada that’s internationally renowned for their beauty and diversity. There are five different gardens (Japanese, Rose, Sunken, Italian, and Mediterranean), numerous bronze statues, a children’s pavilion with 30 hand-carved wooden animals, two totem poles, and a multitude of ornamental birds (a favorite past time of the original owner). There are fireworks during the summer and musical entertainment throughout the year – a throwback to the weekly symphony concerts The Butcharts would hold in the early 1900’s.

Like watersports? You’re in luck! With the Pacific in their backyard, Victoria has a multitude of adventures on the water. From kayaking to canoeing to sailing and scuba diving – there are many activities to experience in the ocean waters.

You can’t travel to the Pacific Northwest without going whale watching. A favorite past-time on Canada’s Pacific coast, numerous boat tours can take you to seek the giants. Orcas are the most common species sighted with three pods of over 80 killer whales residing in the waters around Victoria. However, you might also spy humpback, gray, or minke whales depending on the season.

The city is quickly becoming a travel destination for travelers on two wheels. One of the best-known local trails is the Galloping Goose Regional Trail, a 34-mile trail between Victoria and the old ghost town of Leechtown. It’s also an excellent way to get some exercise and take in some of the sites outside of the city, including Saanich, Sooke, and Metchosin.

The Royal BC Museum

The world-class Royal BC Museum draws people from all over the west coast for their exhibits. Located in the heart of downtown next to the BC Parliament buildings, the museum regularly has special exhibitions and permanent displays on the history of the west coast as well as BC First Nations and Natural History.

No trip to Victoria is complete without spending some time in Victoria’s inner harbor. Surrounded by the city, the area is a favorite among locals and visitors for its stunning views of the mountains, sea, and historic part of Victoria. It’s well worth a walk after dinner when the sun is setting, and the mountains turn a dusky grey-pink. Both the Empress Hotel and the Parliament Buildings are adorned with white lights all year round – adding to the beautiful atmosphere of the area at night.

For the traveling foodie, Victoria doesn’t disappoint. From super fresh sushi and seafood to international fare, you will not go hungry in this town. The city has also embraced new food trends and started their own in true Pacific Northwest style.

Victoria has long been a favorite travel spot for Canadians but languished in the shadows of Vancouver with international visitors. Lately, the trend has been changing as more international travelers bypass the bright lights of the big city and opt for this laid back and historical travel destination.