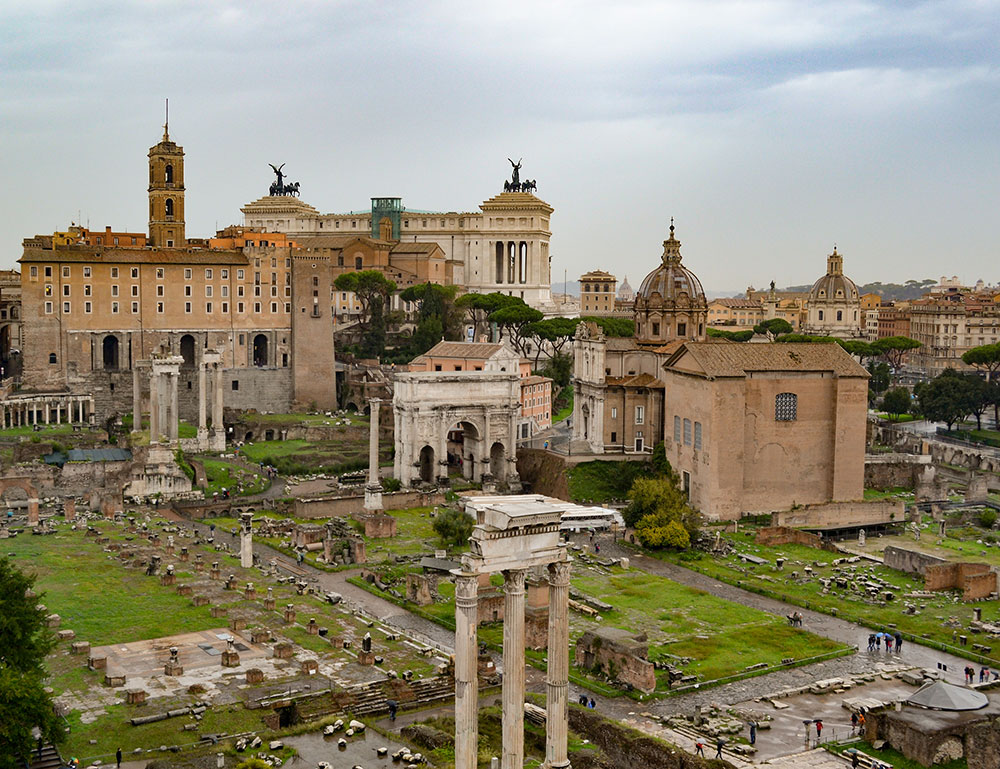 Ah, Roma! There are not many cities in the world that arouse so much amazement and wonder as Rome. There is so much to do, so much to see, and so much to enjoy that you will always feel as if you have missed something. No need to worry! Toss a coin in Trevi Fountain, and you will surely return to Rome.

This amphitheater of ancient Rome is one of the most popular monuments in the world. The Colosseum was home to merciless, raw power where gladiators fought to the death and convicted prisoners grappled with ferocious wild animals; all this was lapped up by a bloodthirsty audience. Its violent history, astounding size, and minimal ruins are what attracts hordes of tourists every day.

It may look like a mystifying stretch of ruins, but in the olden days, the still remarkable Roman Forum was a stunning complex of elegant basilicas, marble-laden temples, and lively public areas. It was the glistening center of a flourishing ancient Rome.

It is a picturesque locale full of tall pine trees, various excavations, excellent views, and magnificent ruins. As per legend, it is here where Romulus assassinated his twin and later founded the city in 753 BC. Archaeological evidence has verified the presence of human settlements in Palatine Hill to the eight century BC.

It is the second most iconic monument in Rome. It was once a temple about 2,000 years ago but is now a church. The well-preserved structure may be dented and aged from the outside, but the interiors tell an altogether different story. Cross the soaring bronze doors and marvel at the biggest non-reinforced concrete dome in the world.

Museums; but so much more!

One requires a lot of energy, strength, and patience to endure the unending ticket and security check queues to get into one of the most majestic museum complexes in the world. But once inside, get prepared for an unforgettable and enthralling experience!

The donation of some bronze sculptures by Pope Sixtus IV to Rome in 1471 laid the foundation of this amazing place where the oldest national museums of the world are housed. The Capitoline Museums are home to the finest collections of Italy’s classical art. The piazza is the creation of Michelangelo; Palazzo dei Conservatori is adorned with sculptures, art galleries, and frescoes; and Palazzo Nuovo consists of Roman and Greek sculptures

The Museo e Galleria Borghese is an exquisite art gallery with a great and enviable collection of Baroque and Renaissance art. Visitors are allowed entry after every two hours. Hence, it’s a good option to pre-book a tour.

Do not miss it: a MUST visit

Vatican City is full of magnificent churches like the Sistine Chapel and Church of San Pellegrino, and St Peter’s Basilica is the best amongst them. It is spectacular, incredibly huge, and a tribute to artistic geniuses over the centuries, drawing nearly 20,000 visitors a day.

You can see and hear the Pope at noon on Sundays during the Angelus prayer and on Wednesdays during his weekly general audience within Pope Paul VI auditorium or in the Square.

Located in an area replete with shopping, hotels, and nightlife, the Trevi Fountain was completed in the mid-18th century and is an excellent instance of baroque art with an enduring mythological appeal. The central sculpture is of Neptune, the god of the sea, who can be seen coming out of the pool flanked by his trusted tritons. The fountain is illuminated at night, making for a grand sight! As per Roman folklore, tossing 1, 2, or 3 coins into the fountain, while keeping the right hand above the left shoulder will respectively ensure that you come back to Rome, fall in love with a charming Roman, or marry that Roman.

Built in the 18th century, the Spanish Steps is one of the best places to enjoy people-watching. You can walk across to the Piazza di Spagna, then to Piazza del Popolo, and later shop at the Via del Corso.

Some of the peaceful leafy retreats in Rome include Villa Borghese, Villa Pamphilj, Parco Savello, Parco degli Acquedotti, and Gianicolo. Breathe in the fresh air, soak up the pleasant sunshine, and revel in the unending beautiful sights.

Get out and explore

Wander across full Roman streets at extraordinary Ostia Antica port; come alive in the mornings by visiting the flower vendors and the market at Campo dei Fiori; sample Jewish dishes at the Jewish Ghetto; check out the Via Appia Antica, the main ancient Roman Empire road, now preserved at Parco Regionale Dell’Appia Antica; savor the delights of gelato at Giolitti or other fine eateries; visit the biggest and most striking catacombs at San Callisto; and regale your taste buds with the best pizzas in the world at Pizza al Taglio. Enjoy!