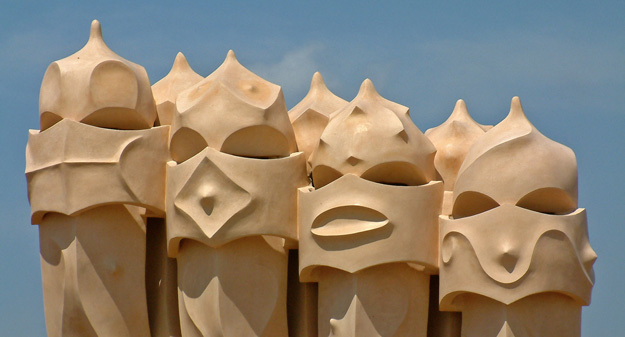 With its mild, Mediterranean climate, immense culture of art, great food, and lively atmosphere, it is easy to see why so many fall in love with Barcelona. Here centuries of history blend with the ultra modern and artistic genius.

Casa Mila was designed by the great Antoni Gaudi in 1906 for the wealthy Pere Mila and his wife as a home in a busy area of Eixample, Barcelona. What is today seen as beautiful and innovative was less than popular at the time of its construction. The local people did not like the iron balcony decorations and stone facade. Pere Mila lived in Casa Mila until his death in 1940, and his widow sold the property in 1946 but lived in the principal residence there until she died in 1964. The other floors were rented out from 1911.

The building was made a UNESCO World Heritage Site in 1984. By the 1980s the building was in bad condition with Gaudi’s original interior decor painted over. After being given a protected status, the building interior was given a thorough restoration to its original paint of vivid colors and paintings of legends and nature adorning the ceilings and walls.

Touring Casa Mila, also known as La Pedrera, takes you through the most critical areas of the building, including the roof-terrace, the attic, known as Espai Gaudí, the Pedrera Apartment, the courtyards, and the exhibition hall. The tours run daily from 9 am and cost 16.50 Euros for adults, 8.25 Euros for children aged 7-12, and under seven get in for free.

The Sagrada Família is one of the most amazing architectural attractions in Barcelona, and a masterpiece of Gaudí’s. Every detail, inside and out of the church inspires awe when seen in person, even if you have no religious affiliation. Gaudí died before he could see the church finished; construction is still ongoing today, 132-years after the first stone was laid. It is hoped that they will finish the building on the centenary of Gaudí’s death in 2026. In 2010, Sagrada Família was consecrated as a basilica by Pope Benedict XVI.

Eight of the 18 planned spires have been completed, while much of the inside is finished. The tone of the light within the mammoth nave is warm and unlike you’d see anywhere. When walking around look up, down, and all around you, so you don’t miss the details that cover every inch of this fantastic building.

The journey to Park Guell on the outskirts of Barcelona is well worth the trip. The park is like no other. Hilly, green, and filled with striking Gaudí designs the park is ideal on a balmy afternoon. The park took 14 years to build, with construction starting in 1900. The original purpose of the site was for houses for wealthy residents of Barcelona wishing to live out of the smog of the city. However, this idea didn’t take, and the site was turned into a park.

There are several Gaudí designs in the park to see. Near the main entrance, you’ll see ‘el drac’ a large salamander covered in mosaics. Up the steps from ‘the dragon’ don’t miss the main terrace’s bench decorated with mosaics in the shape of a sea serpent. The Colonnaded paths are almost dreamlike with their warped form, while the large stone bird nests are part of the terrace walls and designed to look like that trees above them. At the park entrance stand two houses that resemble gingerbread houses. From the park, you can get fantastic views of Barcelona. Entry is free.

In 1904, Gaudí remodeled an existing house in the center of Barcelona known as Casa Batlló or Casa dels Ossos. The house was made for a well-off family and is instantly recognizable as one of the master architects works. The façade is decorated with colorful mosaics and stone that looks almost like it is melting. It is particularly beautiful when lit up at night, but a visual treat at any time of day.

Buying tickets for a guided tour of the building is possible. You will explore the fantasy-like chimneys on the roof, the Noble Floor, where the Batlló family lived, and the main hall. No detail is left out, so look in every direction. Adult tickets cost 21.50 Euros, Children aged 7-18 cost 18.50 Euros, and children under 7 get in for free.

Bellesgaurd in one of Gaudí’s lesser known works and also one of his most unique. It was built over nine years from 1900 to 1909. The structure uses many straight lines in the style of a Gothic castle, a departure from his usual soft, curving lines. Bellesguard was an ancient site that contained the ruins of a castle dating to at least the 14th century. Despite the different lines used, you can quickly see Gaudí’s distinctive style all over the building.

The aquarium is a particularly great thing to do in Barcelona if you’re traveling with kids. Located on Port Vell the aquarium houses thousands of sea creatures in millions of liters of water. The main feature is the Oceanarium, an 80-meter long underwater tunnel that gives you an opportunity to see the residents in a whole new way. Here you’ll see sharks, eels, and many native Mediterranean species.

The aquarium is open weekdays from 9.30am to 9 pm and until 9.30pm on weekends. In the summer peak months, it has a special 11 pm closing time. Prices range from 5 Euros to 20 Euros and are determined by the visitor’s height if they are a child. Adults pay 20 Euros.

Celebrate one of Spain’s most loved and famous artists, Pablo Picasso. The museum exhibits works spanning his entire life. They are displayed chronologically, giving you a great vision of how his work evolved through the years. It also presents you with a fascinating insight into Picasso’s childhood and how that came to shape his artwork.

The museum is open Tuesday to Sunday from 9 am to 7 pm, with a late opening on Thursday. Standard tickets cost 11 Euros.

Barcelona has some fantastic food, and no visit is complete without taking some time just to sit, relax, and enjoy the local food. The city has excellent confectionaries and bakeries. Places to check out are the bonbons of Bubó and Escriba’s cooked candy. Bakeries are easy to find, each offering an array of sweet delights to indulge your sweet tooth.

Catalan cuisine rules the city, and it’s easy to see why. There is a mix of budget and upscale restaurants to tantalize your taste buds. Seafood is always popular here with plenty of choice of where to eat, such as Cal Pep and Cachitos, both serving up fantastic seafood with a Catalan twist. Of course, if you prefer a little Basque style, you’ll find no shortage of tapas in the city.

The fountain is an attraction that you must visit after dark. Once the sun goes down, the fountains begin performing. Spectacular cascades shoot into the air, highlighted by an incredible light show. The fountain isn’t activated all year round, but only during the summer on certain nights, so check to make sure you don’t miss it. The show lasts for 30-minutes and is free to watch.

1 thought on “What to Do in Barcelona”