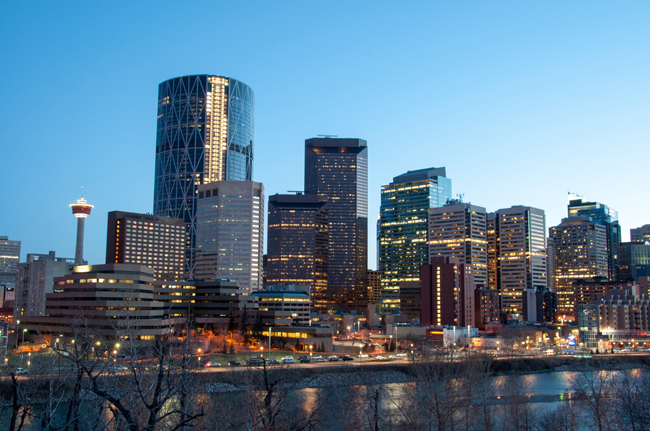 Gateway to the West, Calgary is known for oil, as a launching point for the Rocky Mountains, and of course for its cowboys. Although it’s not a top destination for most world travelers, many in the West descend on it for the Calgary Stampede in the summer and skiing season in the winter. If the thought of a chilly Canadian winter isn’t your ideal holiday, the summer has many great events and activities to enjoy and places to explore.

Calgary is known for its cowboy culture, so it only fits that the most prominent rodeo in Canada (and possibly North America) takes place here. The Calgary Stampede is ten days packed full of rodeos, carnival rides, farm animal and equipment exhibitions, and more. The city gets into the spirit with street parties, parades, and pancake breakfasts, and everyone dresses in cowboy hats and jeans. A quick piece of traveler’s advice – if you want to see any of the rodeos book your tickets well in advance as they sell out fast!

On the northern edge of downtown is Prince’s Island Park. Located on the Bow River and connected to downtown by a bridge, Prince’s Island is a popular attraction with the locals as a great way to spend a sunny afternoon. There is an outdoor amphitheater, a park, local theater acts performing on the grass, and live concerts and festivals during the summer months.

Once the tallest structure in town, the Calgary Tower was the top attraction for locals and travelers from around the world. At 1,228 meters above sea level, a trip to the top gives you a commanding view of the entire city, the Rocky Mountains to the west, and the prairies to the north, east, and south. Hungry? The tower has its own restaurant at the top that rotates 360 degrees while you eat!

A throwback to the days of yore, Heritage Park is a historical theme park complete with an old-fashioned steam train, an old-fashioned ice cream parlor (worth the price of admission right there), an 1860’s fur trading post, and staff dressed like it’s the wild west frontier. It’s Canada’s largest living history museum, so if you’re a history buff, this should be on your bucket list for Calgary. If you don’t like history, it’s still an excellent way to spend a sunny afternoon.

Head to the Hills

Calgary lies in the foothills of the Rocky Mountains. A short drive west and the foothills grow into majestic mountains, perfect for skiing in the winter and hiking and camping in the summer.

A scenic 60-minute drive takes you to Banff National Park, over 2,500 square miles filled with pristine forests, waterfalls, beautiful mountains, and Canadian wildlife. The town of Banff is reminiscent of an alpine village, with small specialty shops right next to ski and snowboard stores. It’s grown both in popularity and size in recent years but still has that small town feel. And in true Canadian fashion, you can sometimes see brown bears, elk, or deer wandering through town. A breathtaking way to see the whole city is to head up the gondola. Within 8 minutes you’re at the top of Sulphur Mountain with a stunning 360 view of Banff, the lakes, and six mountain ranges. The gondola ride itself is not for those with a fear of heights or anxiety problems.

Travel further along the Trans-Canada highway, and you’ll wind up in Lake Louise, a small town in the midst of the mountains with some of the most spectacular views in the Rockies. Known more for its hotel Chateau Lake Louise, the town itself is a small, laid-back place nestled in amongst the grand Rockies. If you’re into hiking, boating, kayaking, and mountaineering, then this is the perfect place to use as your base.

One of the best and largest zoos in Western Canada, the Calgary Zoo regularly has exhibits featuring some of the world’s more exotic animals. In addition to the special exhibits, they have many mainstays.

The zoo is right on the subway system (the C Train) and easy to get to no matter where you’re staying. If you want to see everything, plan on spending the better part of a day exploring this iconic Calgary attraction.

From wildlife to natural beauty to your typical tourist attractions and the Rodeo, Calgary is a great city to spend a few days exploring. It’s long been a favorite travel destination in the west and prairies, and it’s now gaining attention from international travelers.