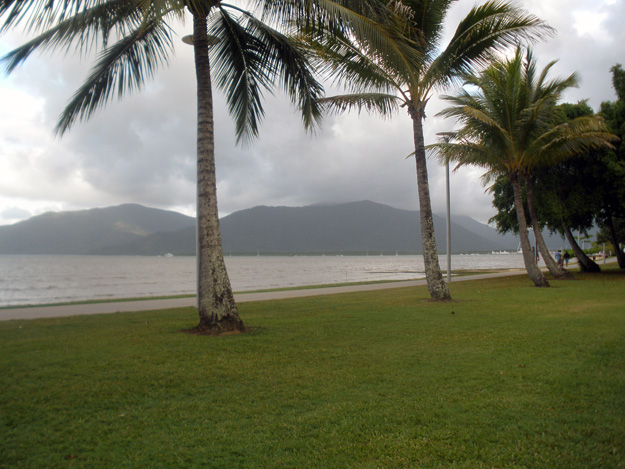 Cairns is located in the far northern reaches of Queensland in the northeastern corner of Australia. Once a booming port for the goldfields, it’s now a popular destination for tourists (foreign and Australian) exploring the nearby Great Barrier Reef and other points further north. It is probably my favourite city in Australia – from its small town vibe to it’s laid back feel and great weather. It’s a great city for travelers as it’s well laid out (so it’s hard to get too lost) with so much in close proximity to the downtown area and waterfront. Plus all the great outdoor activities right on its door step. If you’re wondering what to do in Cairns, I got you covered.

The Daintree Rainforest is a 2-hour drive north of the city of Cairns and well worth it. It is one of the most complex tropical rainforest ecosystems on earth and is also a region of the Wet Tropics of Queensland World Heritage Site.

You can go up and explore on your own, or take one of the many guided tours available. Since I was new to the area and would likely get lost in the forest I took a tour with Jungle Tours. In addition to getting me up there, the tour stopped at a wildlife habitat to see some kangaroos and crocodiles, the Alexandra Lookout for magnificent views of the Coral Sea and Daintree River, Cape Tribulation for lunch (which we ended up sharing with a Komodo dragon who stopped by our picnic table) and to hang out on the beach, a boat ride up the Daintree river to look for more crocodiles, and a walk through the Dubuji Boardwalk in the rainforest. It was a long day but such an experience!

The Great Barrier Reef is the longest reef in the world and the largest living structure on the planet (yes coral is a living thing). The reef is home to thousands of marine creatures including corals, worms, fish, rays, dolphins, sharks, whales, jellyfish and mollusks and is most always on everyone’s list of travel tips for Australia. Cairns has long been a destination for both international and local Australian divers as a starting point for diving the reef. Don’t dive? No worries mate as there are numerous local boating charters that will take you out to cruise through and around the reef, or take you snorkeling so that you can see the reef first hand and up close. Or if you prefer a birds-eye view, there are local helicopter companies that will fly you out so that you can really take in the reef, the surrounding rainforest and the whole city of Cairns.

When I was in Cairns I was told by a fellow solo traveler at my hostel to try the Big Cat Green Island Reef Cruise charter to Green Island and I’m glad I did. Leaving at 9am, we traveled for just over an hour out to the island on a massive catamaran then had 5 hours to explore the island, the water and the Great Barrier Reef around it. The journey out to the island was great as we snaked our way around small coral cays. Once on the island, there were tonnes of things to do:

The island also has several restaurant options so you won’t go hungry while you’re there. It’s a great way to spend the day and experience the Great Barrier Reef first hand.

Running alongside the waterfront is the Esplanade Boardwalk. During the day it’s an idyllic place to catch some rays, peruse the various displays about the Aboriginal and local history, or use the various pieces of exercise equipment sporadically located alongside the esplanade. In the late afternoon, the activity picks up as people jog along, meet for picnics or just meet up to enjoy the scenery. It’s also a great place for travelers and locals alike to hang out and people watch. Be careful to stay out of the water, there are signs posted everywhere about the crocodiles that inhabit the area.

If you want to hit the water to beat the heat the Esplanade has it’s own lagoon. The almost 5000 square meter saltwater lagoon has sand so you can build sand castles (for kids of all sizes) as well as picnic tables, decks, some shaded areas, water fountains and really strange metal fish sculptures. On weekends the Lagoon sets up a stage and features local live music. It’s a great place to hang out right next to the water.

Another great way to see northern Queensland is by hitting the rails. There are several scenic railways leaving from Cairns that give travelers the chance to see the surrounding area.

The Kuranda Scenic Railway travels from Cairns north to the mountain village of Kuranda located in the Kuranda State Forest. You pass through hand carved tunnels, by the Barron Falls and across mountain gorges.

The Gulflander heads out to the remote outback. Long known as the railway that takes travelers from “nowhere to nowhere” the Gulflander travels between Normanton and Croydon, on the same route that once connected the river port to the bustling gold fields. The journey takes a half day and will take you from the wetlands through the grasslands and into the arid Savannah country of Croydon.

The Savannahlander offers a variety of tours that will take you into many of the unique areas surrounding Cairns. Many of the journeys include stops in Stoney Creek Falls, the Undara Lava Tubes, Chillagoe, Mt Surprise, Forsayth, Barron Falls, Karanda, Dimbulah and more. It’s a longer journey that will give you a great experience in a 1960’s classic silver bullet train.