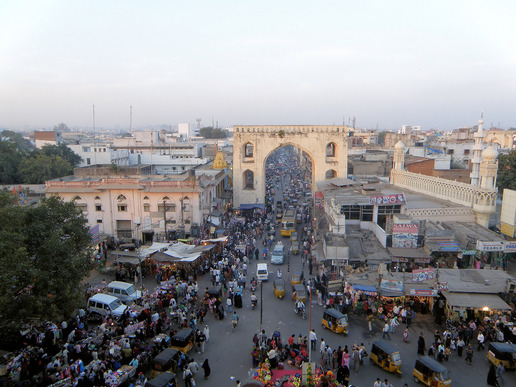 Hyderabad is full of culture and traditions. It is a city of smiles, lights, and thousands of faces. This town not only offers excellent medical and educational institutes but is also well known for its tourist attractions. Offering the travelers a fascinating panorama of the past, bringing the colors and life of earlier periods through its historical places.

Here in Hyderabad, you will find a lot of historical places; below are 5 of the “must visit” places.

Just like the Taj Mahal is to Agra and the glistening steel of the Eiffel Tower is to Paris, Charminar is the signature of Hyderabad. It was built right in the center of the old city on the banks of the Musi river to either ward off a deadly plague epidemic that was sweeping through the area or to celebrate and remember a plague epidemic that had just ended (one of history’s little secrets that she’s not telling). The four tall, graceful minarets rest on the top of the monument at each corner and is a spectacular form of architecture. It offers 45 prayer spaces and a mosque within. The monument is illuminated in the evening giving a breathtaking view.

Near this historical attraction, you can also find Mecca Masjid and the famous colorful Laad Baazar.

About a kilometer away from the Banjara Darwaza are situated the Qutb Shahi Tombs. These are built using a combination of Hindu, Pathan, and Persian architecture styles, a fascinatingly beautiful site which every traveler must see when visiting the area. In addition to the beautiful architecture and history, this is one of the world’s rare spots where an entire Dynasty was interred together.

Acquired by the second Nizam in 1750, the imperial Purani Haveli Palace was later converted into a museum which showcased a fascinating collection of that time and currently exhibits gifts and souvenirs presented to the last Nizam. You will be able to view some majestic pieces which include models of prominent buildings of the time made in silver, a gold burnished throne, classic cars, and much more.

Constructed by Raja Nayrun, this massive Hyderabad fort in the heart of the city is a historical masterpiece; though it’s lost some of its former beauty as the government has lacked in its upkeep. You can still view it when passing by as its high-rise construction is something worth seeing.

The fort is one of those historical masterworks which can’t be ignored. Originally a mud hut that was built in 945 CE by Kakatiyas as part of their western defenses, around 1507 the fort was reconstructed (over a period of 62 years) by the first three Qutb Shahi kings, turning it into an impressive display of granite.

Throughout it’s long and varied history, the fort has been known for its beautiful sound acoustics, creative and inventive water supply system, and the famous (or infamous) Fateh Rahben gun. The amazing sound and light show in Golconda Fort takes you back in the past when it was full of life and glory.