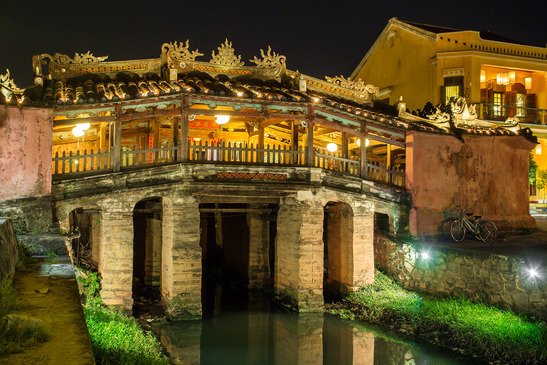 The best way to experience this culturally rich, chaotic corner of South East Asia is to dive straight in. Immerse yourself into the character of Hanoi, dodge the many scooters whizzing down the street, sample some of the amazing street food, and visit its most historic sights. It’s possible to pack in lots in the 48 hours you have in Hanoi.

The Old Quarter of Hanoi

To dive in, head to the Old Quarter where Hanoi’s original streets are narrow, busy, and unchanged since the 1400s. Today, the merchandise sold by the independent vendors here may be more modern, but elements of the past are all around you. Meander your way through the maze of tiny streets running your hands over the fine silks or try on some locally crafted jewelry. The Old Quarter of Hanoi is the perfect place to find a unique souvenir and support a small artisan creating traditional crafts. It is in this district where you’ll find Dong Xuan, Hanoi’s biggest market. Make sure to stop for some of Hanoi’s most common dish of noodle and beef soup is known as pho bo, you haven’t properly visited the city without sampling it.

Imperial Academy and the Temple of Literature

Make sure to visit Imperial Academy, Vietnam’s oldest university built in 1070 at the Temple of Literature. Here you will see centuries worth of ancient building styles, Literature Lake, and several symbolic courtyards and paths. The gardens are beautiful, lined with ancient trees, perfectly groomed lawns, and open spaces.

Find your way to Hanoi’s most central and famous lake Hoan Kiem Lake, home to the iconic Huc Bridge, the extremely rare Rafetus swinhoei turtle, the 18th century Temple of Jade Mountain, and the Turtle Tower.

As evening rolls around, try the local beer, Bia Hoi, which is sold for super cheap directly from the keg at a variety outdoor cafés. After a beer or two go in search of dinner – seafood is popular here, almost always fresh, and served at many places. Oc Vi Sai Gon, Pho Bien Seafood, and San Ho always rate highly by traveling foodies and locals alike. Finish up the evening by enjoying the Thang Long Water Puppetry Theatre, a tradition that is over 1,000-years-old.

Hanoi wakes up early, so you can start your day early by finding a street food vendor selling banh mi, a Vietnamese take on the French baguette. Much lighter then it’s French counterpart, the bread is cut and made into sandwiches with a variety of fillings, such as peppers, pork, and carrots.

To better understand the history and culture of this northern Vietnamese city a sobering visit to Hoa Lo Prison is a must. Originally built by French colonists to hold Vietnamese who tried to fight off French control, it became the central prison during the Vietnam War for American prisoners of war. The interior has been excellently preserved and gives visitors a somewhat cold feeling. The ‘American War’ area of the prison certainly gives an interesting and different point of view on the conflict. Hanoi is one of the most conservative and communist areas of Vietnam, and this is evident when exploring this area of the prison. It paints America as an imperialist power that was standing in the way of liberating South Vietnam to the Communist cause. While a lot of this is propaganda, it certainly forces you to consider the war from a different perspective.

Stop for a coffee – not an ordinary coffee but one with an unusual twist. After the French had introduced coffee to Vietnam in the 1800s, the drink became popular, but due to a lack of fresh milk, the egg milk coffee was born. Egg yolk is whipped and mixed with sugar and condensed milk before being added to the coffee. Find a nice café for a rest and people watching while you enjoy this unique treat.

Ho Chi Minh is the revered former leader of North Vietnam. He was the leader of Vietnam’s independence movement and nominated himself as the country’s president in 1945. He died in Hanoi in 1969 and like Russia’s Lenin was preserved and placed in a mausoleum where the public can pay their respects to him in his glass coffin. After filing through ‘Uncle Ho’s’ massive, granite resting place head outside to see his humble stilt house, located behind the Presidential Palace. The modest home was supposed to show his connection with the people and fuelled the propaganda machine. The surrounding gardens and carp pond are a beautiful and peaceful place to spend an afternoon.

The biggest lake in Hanoi, West Lake is only a short walk from Ho Chi Minh’s stilt house. The lake area has plenty of activities, including lovely gardens, swan boats, Quan Thanh Temple, and the beautiful Tran Quoc Pagoda, which captures the evening light wonderfully. Head onto the water to eat dinner in a boat restaurant and afterward make your way to the Sofitel Plaza Hotel on Thanh Nien Road. At the very top of the hotel is the Summit Lounge, where city and lake views are amazing as are its unique cocktails. You can sip your drink while relaxing on the open air terrace, the perfect way to finish your stay in this fantastic city.

1 thought on “48 Hours in Hanoi Vietnam”